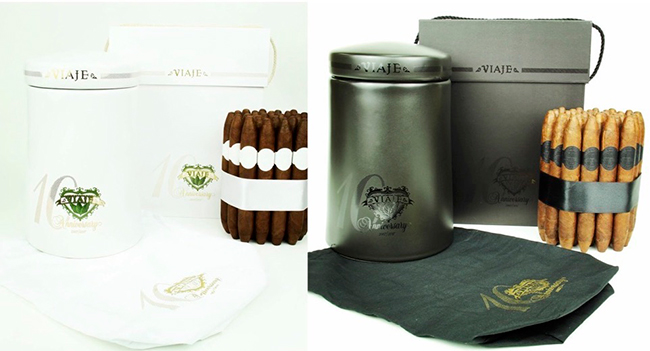 VIAJE 10TH ANNIVERSARY: 2017 marks a very special year as Viaje celebrates their first decade. To mark this milestone Viaje under the direction of creative owner Andre Farkas created something very special for you to enjoy, Viaje 10th Anniversary. Andre used a very unique shape to celebrate Viaje’s 10th, the double torpedo . This shape is one that they championed over the years and they feel best fits this special occasion.The 10th Anniversary uses AGANORSA leaf tobacco and is manufactured at the famed Raices Cubanas factory in Honduras. A total of 600 white jars and 400 individually numbered black jars were made. Every aspect of production, from leaf selection and construction to design and packaging was scrutinized to ensure perfection in both projects. Both jars contain wheels of 24 cigars featuring all Nicaraguan tobaccos using a select Criollo '98 cover leaf. The white version uses more Corojo, tip toeing the line between medium and full. The black sits comfortably on the fuller side thanks to a more Criollo dominant blend.