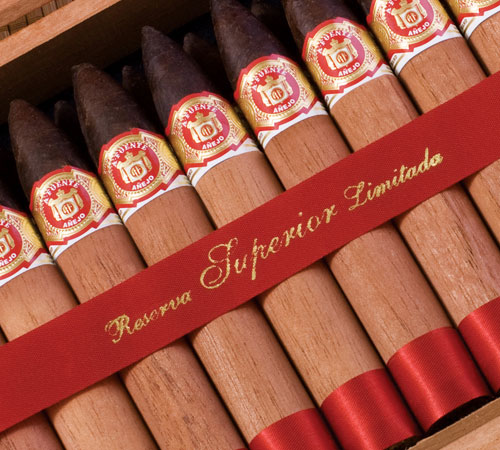 ANEJO Reserva No.60: In September of 1998, Hurricane Georges tore through the Caribbean Sea causing widespread destruction throughout the region, including the famous Chateau de la Fuente farm in the Dominican Republic, where the wrapper leaf for the acclaimed Fuente Fuente OpusX cigar is grown and harvested.

Two years later the storm's destruction resulted in a shortage of Fuente Fuente OpusX wrapper tobacco. Rather than halting production, Carlos Fuente Jr. ordered the use of a different wrapper, an aged Connecticut broadleaf. Once again, the Fuente family forged triumph from tragedy, and the Arturo Fuente Añejo cigar was born.

One of the world's most rare cigars, the Añejo cigar is rolled with the very best Dominican filler and binder from Chateau de la Fuente, then adds a 5-year-old Connecticut maduro wrapper aged in a Cognac barrel. This blend yields a rich, spicy, slightly sweet smoke and the unique aging process leaves a distinct finish.

Typically only available at Father's Day and Christmas, this cigar is one of the most exclusive cigars in the world today.
Rich maduro wrapper leaves aged in Cognac barrels make the Arturo Fuente Añejo cigar a unique smoke. While this line features several different sizes, it is home to one of the world's most famous shapes, the No. 77 or Shark as it is commonly known. The Shark is the first torpedo shaped cigar ever rolled that progresses from a rounded parejo shape to a square press, as shown below. This Añejo cigar is particularly rare.